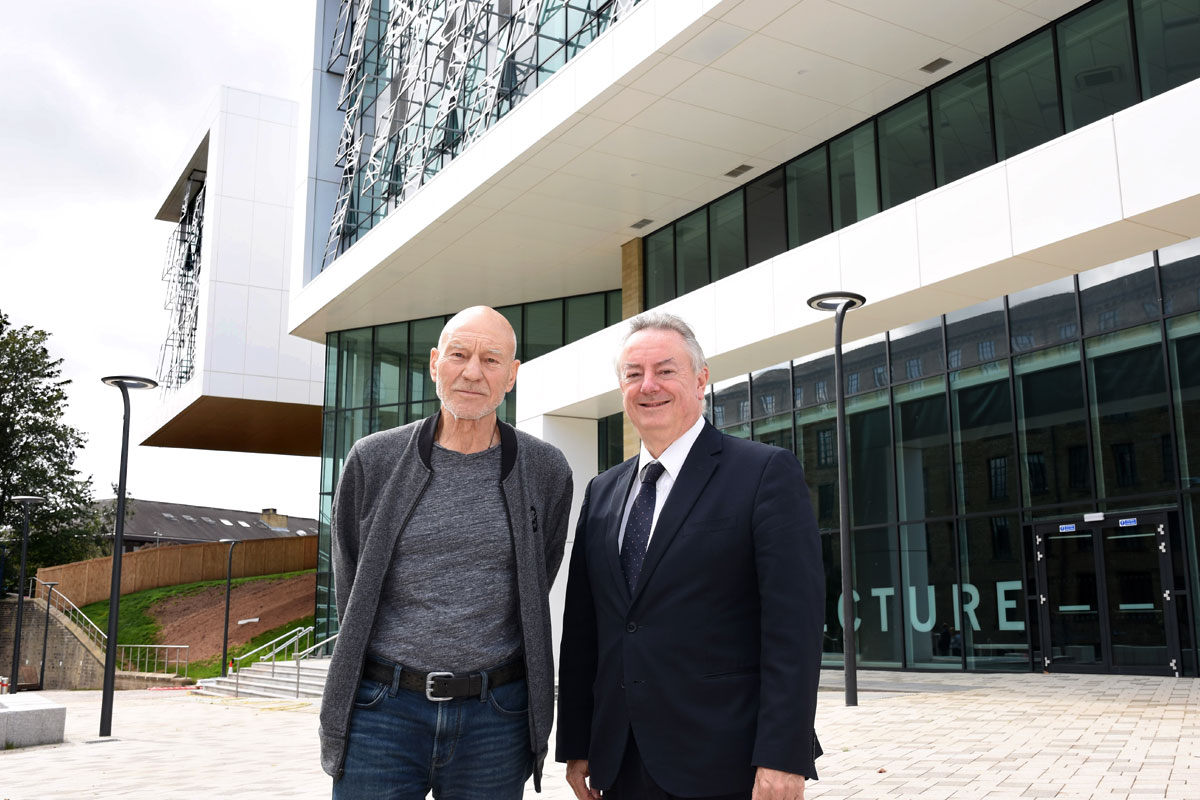 Sir Patrick Stewart (left) with the Vice-Chancellor, Professor Bob Cryan, outside the new Barbara Hepworth Building at the University of Huddersfield

The University was delighted to welcome its Emeritus Chancellor, Sir Patrick Stewart, for an unexpected visit to the campus, which afforded the world-famous actor the opportunity to view the University’s new £30 million flagship building.

The Barbara Hepworth Building was officially opened during the recent July awards ceremonies and will be the new home for the University’s School of Art, Design and Architecture and over 2,000 students who will share the extensive space and facilities.

Sir Patrick, who finished filming the new Star Trek: Picard television series just a week ago, returned to the UK and was, as they say ‘just passing’, so he phoned to see if it would be possible to visit.

“We’re always delighted to welcome Sir Patrick to the University and he was very keen to view the latest addition to our campus, the Barbara Hepworth Building,” said the University’s Vice-Chancellor, Professor Bob Cryan.

Sir Patrick was overwhelmed by the dynamic, state-of-the-art facility, which is designed to act as a “catalyst for creativity, collaboration and learning” and will ensure that Huddersfield’s creative students will have access to some of the most advanced facilities in the country.

The concept behind the building was inspired by the Bauhaus cultural movement where all creative disciplines benefit for being under one roof and the students can be inspired by the work of others. 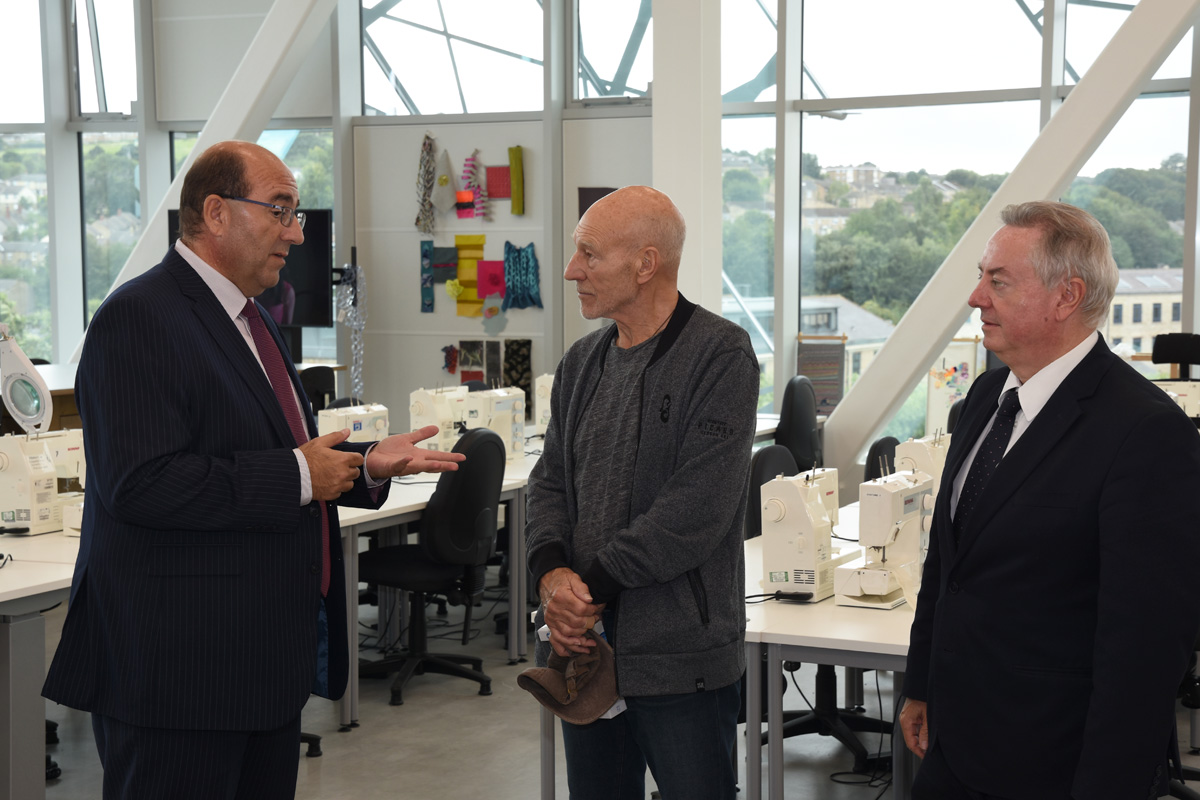 The building takes its name – with the consent of the family – from the famous Yorkshire-born artist and sculptor, Dame Barbara Hepworth, and the University is already enjoying close links with the famous art gallery, also bearing the sculptor’s name, The Hepworth Wakefield.

“It could not be more appropriate that Dame Barbara Hepworth’s name is attached to this building,” said Sir Patrick.  “As I walked through the vast, open structure, it almost appears that the building is in motion and the vistas it presents are extraordinary,” he said.

The Barbara Hepworth opens its doors next week for the start of the academic year when fashion designers, architects, illustrators and animators will operate in the same environment as costume and graphic designers.

One of main features is the art visualisation suite, named the Phidias Lab, where students will be able to develop and prototype 3D models in an immersive VR environment and have the space and facility to experiment with emergent visualisation technology. 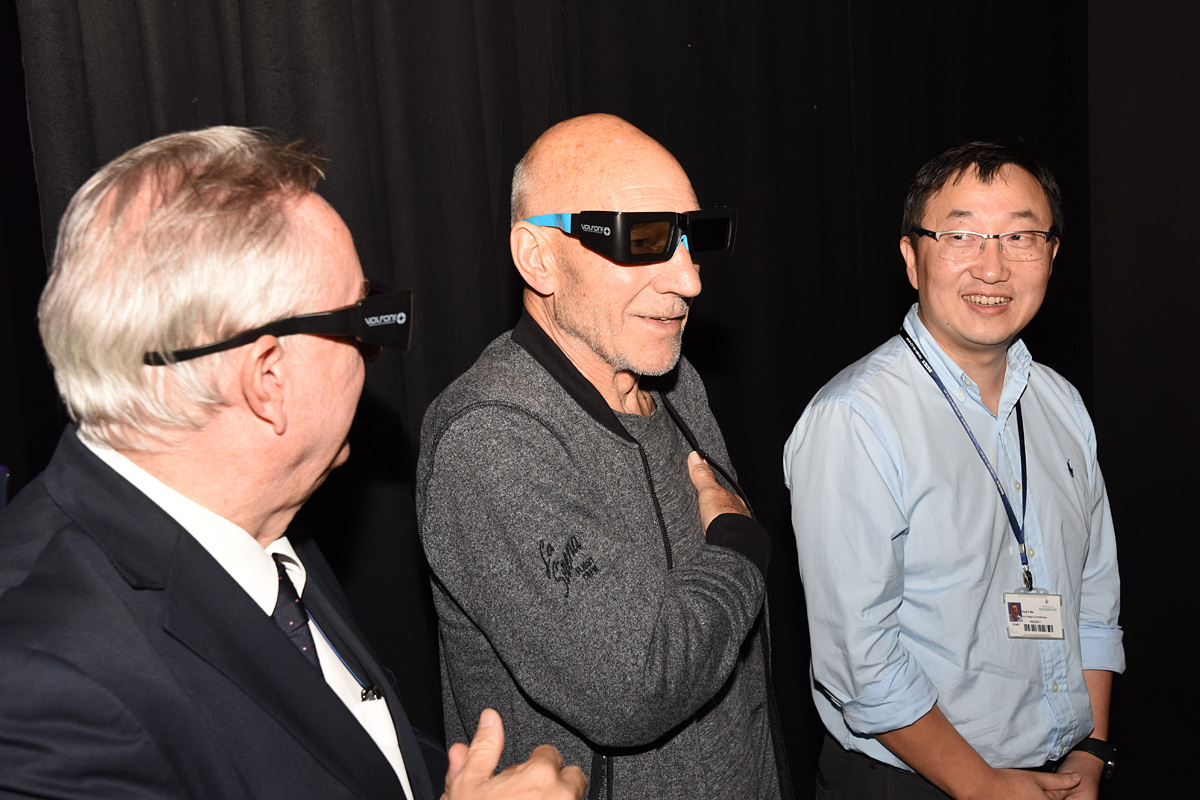 Star Trek: Picard - fans will be surprised and even shocked.

Sir Patrick has just finished filming the television series, Star Trek: Picard, which will see him revisit the role of Jean Luc Picard from the Star Trek franchise as captain of the Starship Enterprise, but this time will be different from his time directing operations on the ship’s bridge.

“I don’t regard it as going back, in fact, we are definitely moving the series forward and that’s what made the difference for me,” said Sir Patrick, who initially turned the part down twice.

“It was a very difficult decision,” admitted the Shakespearean actor.  He was eventually persuaded when the producers explained in detail how they were going to progress the series and that it would be a vastly different world for the former starship captain and far from a walk down memory lane.

The new series – broadcast dates still to be announced – is set 20 years after the last moment of its famous predecessor series, Star Trek: The Next Generation, which ran from 1987 to 1994.  It’s a new world, says the actor, who describes Picard as a man who has undergone disappointment, trauma and serious loss and, at first, not remotely the same man as he was.

“We are looking at a new world with new objectives, problems and issues that could not have been raised when we were making The Next Generation and I found that very exciting,” said Sir Patrick, who viewed the first three episodes just last week before flying back to the UK.  “It’s very exciting and people will be surprised and perhaps even shocked.”

And will we see him back on stage?  “Oh yes!” came the answer.

“I am not giving up my stage work, though it may have to wait for now because there are three projects that I have finished, two films and the TV series, which all need promotion.  So I am clearing the decks for that and then there is also the possibility of a second Picard series filming in March next year.”

Star Trek: Picard will be released at the end of January 2020.

Uni high in top quartile for staff with PhDs

Huddersfield in top four for employability

…according to figures released recently by the Higher Education Statistics Agency